I was asked to put into an article context of what it’s like to be the parent of a youngster who’s racing Cross-Country mountain biking (XC).

For me, the past few seasons have been really interesting, really chaotic at times, very rewarding and completely heartbreaking.

My son races XC in usually either the Southern XC series or the Banjo Cycles sponsored XC Rampage series.

He’s been massively interested in bikes since the first time at under 3 years old when he started riding without stabilisers.

I’d assume my own interests in riding and racing have gone some way to nurturing his own development, but I try to ensure I don’t force him or push him to ride in any context.  I just let him ride when he wants, how he wants.

It’s exceptionally rewarding as he’s growing, both as a rider and as a person, we’re doing longer rides, we’re doing harder terrain and he’s pushing himself more and more when he goes out, both physically and mentally.

I obviously encourage him to race/ride, but the ultimate decision comes down to him.

The racing can to some extent be amazing to watch/see and can of course be heartbreaking.

Season 1 for my boy was a bit of both.  He had a habit of being a complete power monster coming off the line and led 4 out of 5 races at XC Rampage, using his strength and power to blow away the pack chasing him. However, that’s also where the glory and amazing bits ended, he also had a nasty habit of being the rider who crashed…Usually at XC Rampage series, out of the leading position! 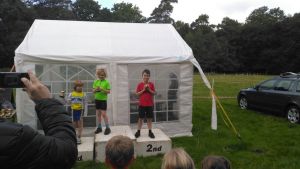 One time we were at Checkendon, he led by 30s on lap 2, going into the woods….time passed…. More time passed… The rider in 2nd place popped out of the trees… but my son didn’t…. The cries were heard from our position and myself and my wife looked at each other with “Yup, that’s our boy crying”. It still to some extent gives me shivers and goosebumps just writing it down. Of course, he was fine… in 99.9% of crashes at their speed, you get little more than a bit of a bump and a 1mm cut… but at the time he was heartbroken, upset and all you can do as a parent is give them a hug and some Haribo, it solves all problems does Haribo! 🙂

The ecstasy came at XC Rampage the race later, where my son once again led…. But crashed this time going into the woods and lost first place, but did re-mount and get a 2nd place finish, which was of course brilliant…. He was on a high for days and you really feel like you’ve accomplished something. 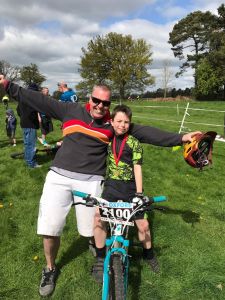 We go into every weekend with the same moto “have fun and enjoy yourself”…. The day he stops enjoying it, that’s the day we hang up the pedals and call it a day. But anyway, you turn up at a large field of riders, you think “oh my… what do we do now”, the answer is simpler than you sometimes think. It’s as simple as walking over to the big tent and asking the people at the desks, this is what they do, what they’re used to and what they (for some weird reason) really enjoy, they enjoy making your day easier, better and more fun.

You put a number on the bike, your child lines up and they’re OFF!

For better or worse you watch them disappear into the woods.  (Or indeed if they’re really small you can run alongside them, nothing wrong with that at all) You’re then waiting… patiently, or impatiently until they pop out of the woods, come down the start/finish and they go off again. You’ll be shocked and impressed how well they’re doing, you’ll be astounded they can carry on after riding so hard and fast, but you know what, they’re far more resilient than we think, they’re far more into this racing thing that we expect and they’re coming past looking exhausted, but they’re not stopping, they just carry on… some on little wheels, some like my son, now on 26” wheels and flying along.

Eventually they cross the line to 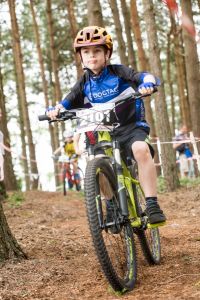 the flag and they’ve done it… they may be 1st, they may be 25th, but they’ve done it and completed it. All around the group of parents and children you can hear the praise and the “daddy daddy, I did…… “ and you just give them a hug and laugh, while trying not to shed a tear at the same time, welling up as a proud parent does throughout the life of your youngsters.

After this, it can get serious, it can get a little more complex, don’t forget, a lot of the parents of racing kids are racers themselves, me included… But you have to sometimes reign it in, hold it back, remember why we’re doing this. We’re doing this for fun… for pleasure and enjoyment. But the bike upgrades begin, the Halfords special is swapped for an Islabikes Beinn, the school PE shorts are swapped for Endura baggies or Lycra and instead of your Sundays being taken up by nice strolls with the dog, you’re off XC Racing again…. And again.

I’m exceptionally lucky that with my boy now being  9 and a big lad for his age, he’s on a 26” bike, that means that heading out for a ride with him is fun for all of us, he now joins us for the ‘mens ride’ on Friday evenings, which means a Ridgeway ride over to Wantage to Costa coffee and a 15 mile ride, where we stuff him full of Gingerbread men and cake and he gets to laugh with the big guys and do some ‘crazy roots’ on the way round… What he doesn’t realise though is we’re secretly training, training both his legs, his heart, his skills and his mind… It’s all cycling, it’s all fun, but it’s training too. He encourages this as when we get to certain parts it’s met with “Daddy, shall we race to that tree”… I’m really fortunate that I still have it in my legs and heart to beat him! But time is passing, it’s running out and soon, he’ll be trouncing me on the sprint to the tree! I’m looking forward to that day though in honesty.

The courses the kids ride are brilliant, they’re fun but not too insane… You do see some kids walking sections, but you know what, there’s nothing wrong with that, they’ll ride it next time, as their skills and confidence improves, they’ll shock you by saying “we may as well have a try”  and in most of these times, they’ll make it… they’ll ride off laughing as you shake your head and think “Sheesh, I’m not sure I can ride that myself”

If I were to sit here and think of the downsides, well, there’s not many, but if your child is at the pointy end of the race it is your time and your wallet that takes the downsides, new bikes as they grow along with training groups/clubs and the time and expense to get to them. But they’re all worth it, it’s what we do as parents, we try to give our kids the best, the things we never had when we were kids and the chances to excel that we were never able to have ourselves for whatever the reason. My son is right up there in my world as my ‘best mate’ anyone who sees us, rides with us or plays football/whatever with us, soon sees that, the racing and cycling has given us this bond and keeps it strong within us both.. We spend masses of time together getting to forests, to mountains and just out riding, but you can’t put a price on the reward of spending time with you child.

Where do I see this all going… Heck, I don’t really know. This season he’s riding in the Southern XC series, the kids he may have beaten last year are riding more, training more and are faster than  they were, this all means that my son is currently 5th – 7th place in the finishing positions, but he thinks (as do I ) that he can make the step up back to the podium some time soon ! What happens in the future, well that’s impossible to say… but the journey keeps giving us pleasure, so we’ll go with it 😉

As a parent, the two pieces of advice I’m giving are “keep it fun” and “talk to the other parents”… We’re all there cheering our own and other kids on.. but we’re all just regular people too… Join in… make it fun for you as well as fun for them.

See you out there.

This site uses Akismet to reduce spam. Learn how your comment data is processed.